Today, Elyse and I lost our best friend, Bear. His loss was sudden and unexpected. I am writing this post as both an announcement of what happened, and to celebrate the many wonderful memories we shared with our beautiful pup.

I would appreciate very much if our friends and families would read this post in its entirety. It’s a little long, but it contains some information we’d very much like to share. 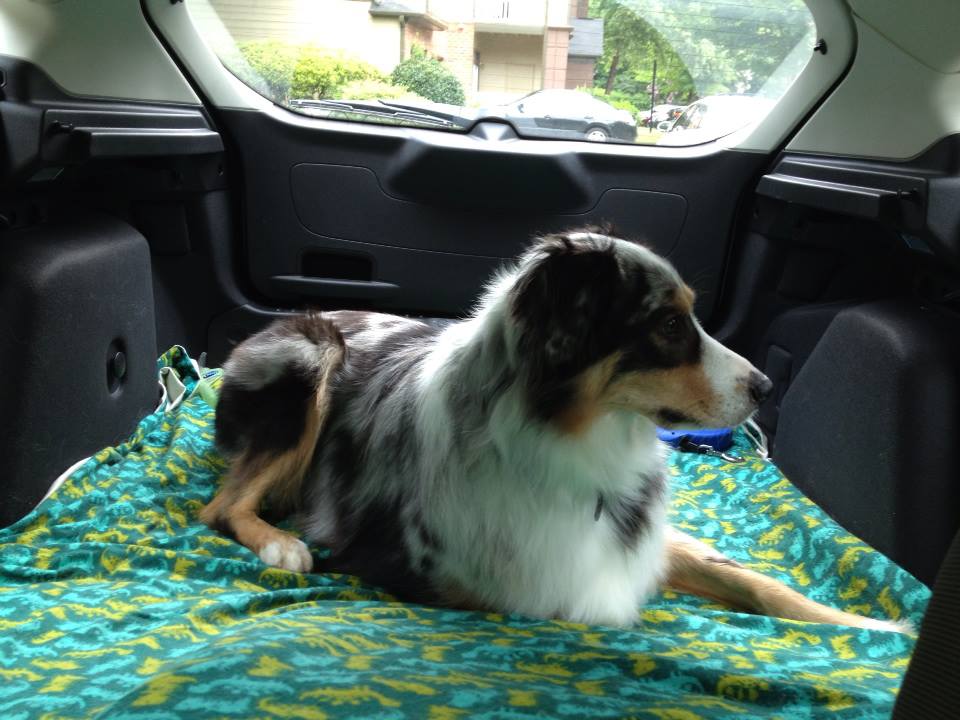 Bear was 6 years old when he passed this morning. A little more than 48 hours ago, Bear appeared to be a normal, healthy dog. We were visting Elyse’s parents in the mountains for Thanksgiving, and when we loaded him in the car for the trip home Friday morning, he looked like his normal self. Bear was always super excited to go on car rides, and he always knew we were going somewhere when he saw his yellow bag full of food and toys.

By the time we got home, Bear was no longer his normal self. He had trouble getting out of the car, and stumbled a little on his way inside the house. Elyse and I took him inside, thinking he was car sick, and gave him some food and water. We then left Bear at home while we went to a doctor’s appointment, and when we got back, we knew something was wrong. He hadn’t touched his food, seemed very lethargic, and wasn’t walking normally.

We took him to the vet, who did an ultrasound and discovered pericardial effusion around Bear’s heart. This basically means there was a bunch of fluid surrounding his heart, and it was preventing his blood from being pumped to the rest of his body. We were advised to take him to a 24-7 pet emergency hospital for surgery.

We drove immediately to Blue Pearl Vet in Sandy Springs, GA. I sat with him the back seat as we made the 20 minute drive, and held his head in my lap. He was very lethargic and sleepy, as you can tell from the picture below. 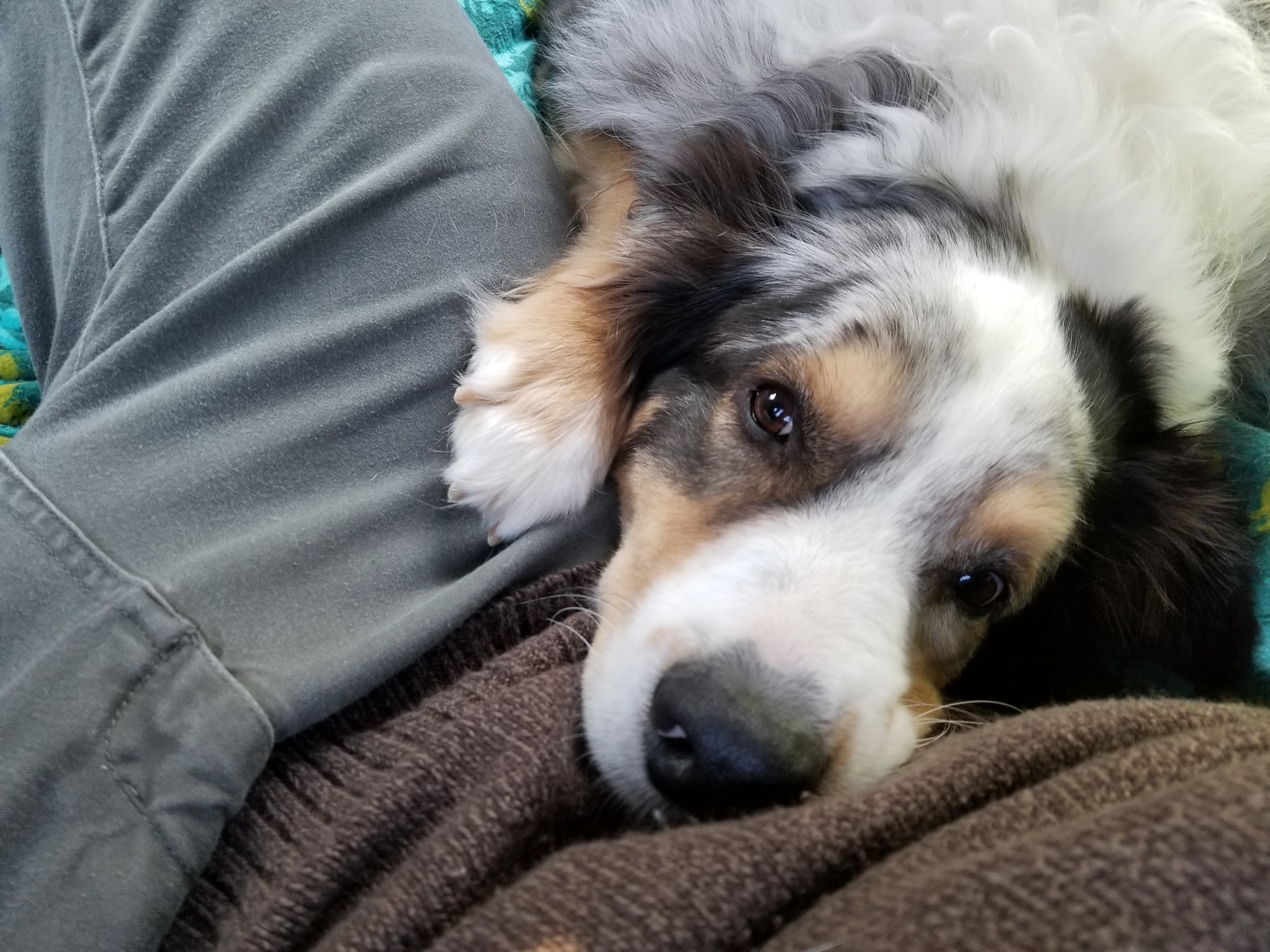 As we pulled into the parking lot, Bear tried to stand up, but then collapsed in the back seat. After getting him down from the backseat and into the parking lot, he collapsed again, and this time he didn’t get up. As he laid there on the asphalt unable to move, our hearts broke. We knew it was very serious. Elyse ran in to get some help, and I managed to pick him up and carry him the rest of the way inside.

It took a few minutes for us to be acknowleged by the employees at the front desk. During this time, Elyse and I tried our best to comfort our best friend as he laid on the floor, unable to move. The situation was very bad, so much so that a woman came up to us and asked if he had been hit by car. Finally, after what seemed like an eternity, a couple of nurses came out with a cart, placed Bear on top, and took him in the back.

A few minutes later, a doctor visited us in the waiting room, and explained the situtaion. Bear needed to have the fluid that had built up around his heart removed. This is a risky procedure that involves putting a needle very close to his heart, and draining the fluid. During this process, Bear was only given a local anesthetic, but the doctor said he handled it like a champ.

After they drained the fluid, Bear seemed a lot better. However, the cause of the fluid build up was still a concern. The doctor was worried that it could either be caused by an aggressive cancer called hemangiosarcoma, or by rat poison (or another kind of rodenticide). At this point, we were hoping it was rat poison since at least it’s treatable, but since both cardiologists at Blue Pearl Vet were unavailable due to the holidays, we couldn’t confirm right away.

One thing that we kept holding onto was something one of the doctors told us. He said that sometimes this type of internal bleeding / pericardial effusion had unknown causes (i.e. it’s “idiopathic”), and that if Bear started showing signs of feeling better, we could take him back home today, and then bring him back on Monday to be looked at by a cardiologist.

During this time of waiting, we visited Bear in the hospital. We sat with him, kissed him, hugged him, and even took him for a few walks. When we weren’t visiting him (there were times the doctors needed to monitor him without us there), we were constantly calling the vet and checking on his status. Sometimes, we got positive reports. However, we were told a couple of times (Saturday morning, and again this morning) that he would need another surgery to remove the fluid. The last time we were told this, the doctor also said they were bringing in the cardiologist to take a look at Bear. The fact that they were bringing in someone who was initially not scheduled to work today made me very nervous. So, Elyse and I decided to go visit with him, even though we would be coming outside of normal visiting hours. We just knew we had to be there for Bear.

I stopped by Target on the way and got him a bunch of tennis balls, treats, and a new toy. I also brought Bear his rope that he’s had ever since he was a puppy (there’s a video near the bottom that shows him playing with this rope when he was very young). Shortly after, we made the drive down to the vet. Once we got there, the doctor gave us some devasting news. A large mass was detected in the right atrium of Bear’s heart, and combined with a previous ultrasound of his spleen, it appeared that Bear not only had the highly aggressive hemangiosarcoma cancer, but that it had metastasized.

We were told the prognosis was grave. We asked about chemo, and also about a procedure called a pericardial window (which would allow the blood / fluid to drain into Bear’s chest cavity instead of around his heart), but the doctor said both approaches are risky, would decrease the quality of life for Bear, and would not be able to cure his cancer. The doctors recommended humane euthanasia so that Bear would no longer suffer.

So, Elyse and I made the very tough decision to humanely euthanize our puppy so that his passing would be peaceful, and so that he wouldn’t suffer any more pain or discomfort. It’s a decision that I hope none of you ever have to make, and is something that I cannot shake or stop thinking about.

Once the decision was made, Elyse and I were able to visit with Bear for a little longer. We hugged him, kissed him, tried to give him treats and get him to play with his toys (sadly, he wasn’t interested in either of these), and told him how great of a pup he was. We told him how much he meant to us, and talked about our many memories together. For someone whose never loved a dog like this, our behavior may seem odd. But I can’t express to you how much Bear means to us, and how big a part of our family he actually is.

Finally, the doctor came in, sat on the floor, and gave him a series of shots. Bear wasn’t in pain at all. We hugged him and talked to him through the entire process, and after a couple of minutes, he simply appeared to fall asleep. No pain, and I hope no sadness.

The aggressive and silent nature of hemangiosarcoma is scary, and I would like to raise awareness about this disease. It also appears to be fairly common, and one of the ER doctors we spoke with said she usually sees one case of hemangiosarcoma everytime she rotates through the ER shift.

One of the scariest things about this cancer is that there are often no signs of it until it’s too late. Between the time Bear got in the car on the way home from NC, to the time we arrived in Roswell, GA (2 hours later), he was a completely different dog. Furthermore, few advancements have been made in the treatment and diagnosis of this cancer in the last 20-30 years, since it primarily affects dogs and not humans.

While we are just starting this process, and have already been in contact with some research groups, I am asking you to please provide your email at the following link if you would be willing to make a donation in the future to help dogs like Bear, or to keep track of our progress as we move forward with the above goals.

As devastated as Elyse and I are about losing Bear, we are happy to have shared so many great memories with him. Here are some of those memories (I will be adding another post in the next few days that is dedicated to even more of the memories we’ve shared with Bear).

This is what Bear looked like when we first brought him home. 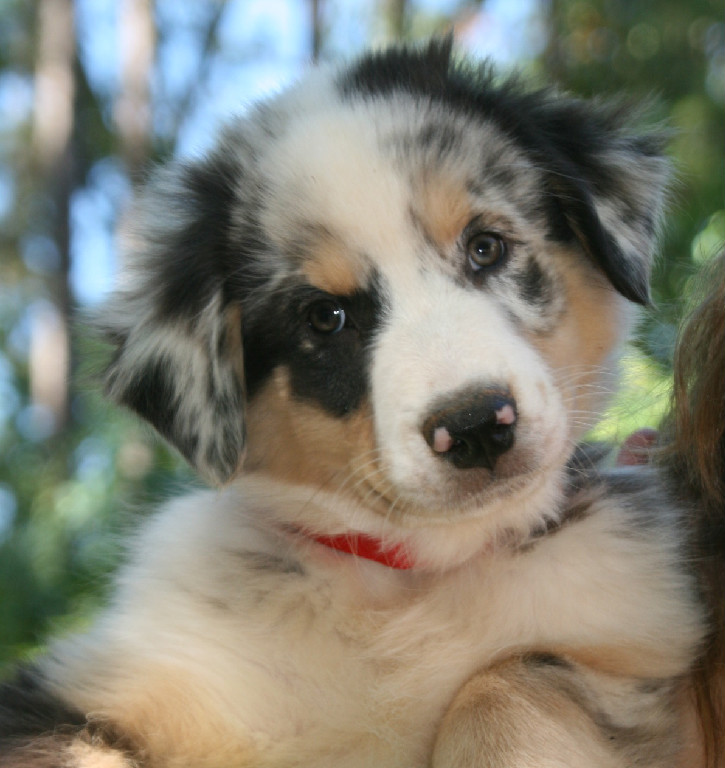 Here’s a video of Bear playing with the same rope he had when we had to say goodbye.

Here’s a young Bear pup going for a walk on a beautiful, fall day. 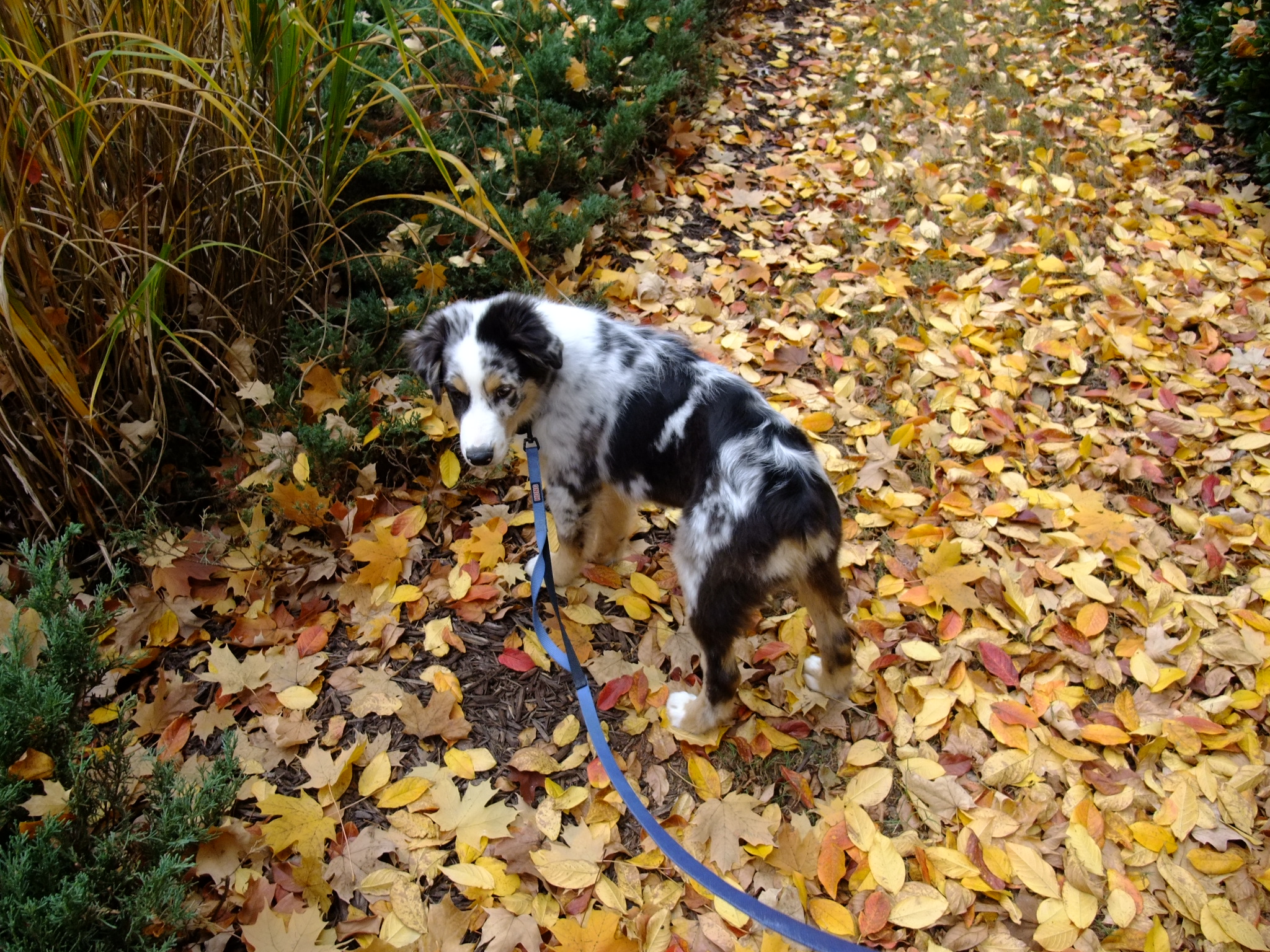 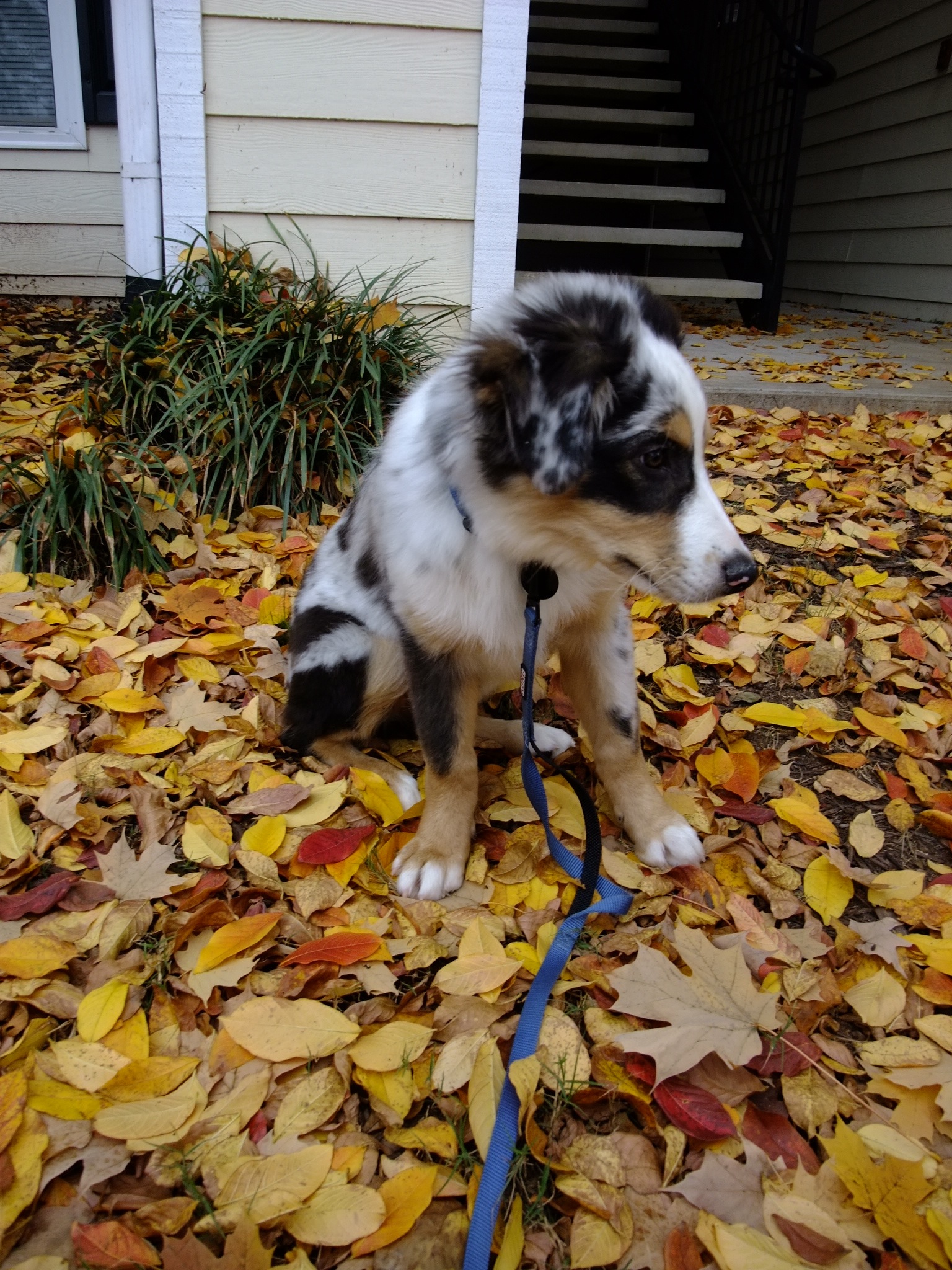 We dressed bear as a bumble bee one year and took him to a fall festival in John’s creek. He was so cute, and even got to walk on stage with other dogs that were dressed up, as well. 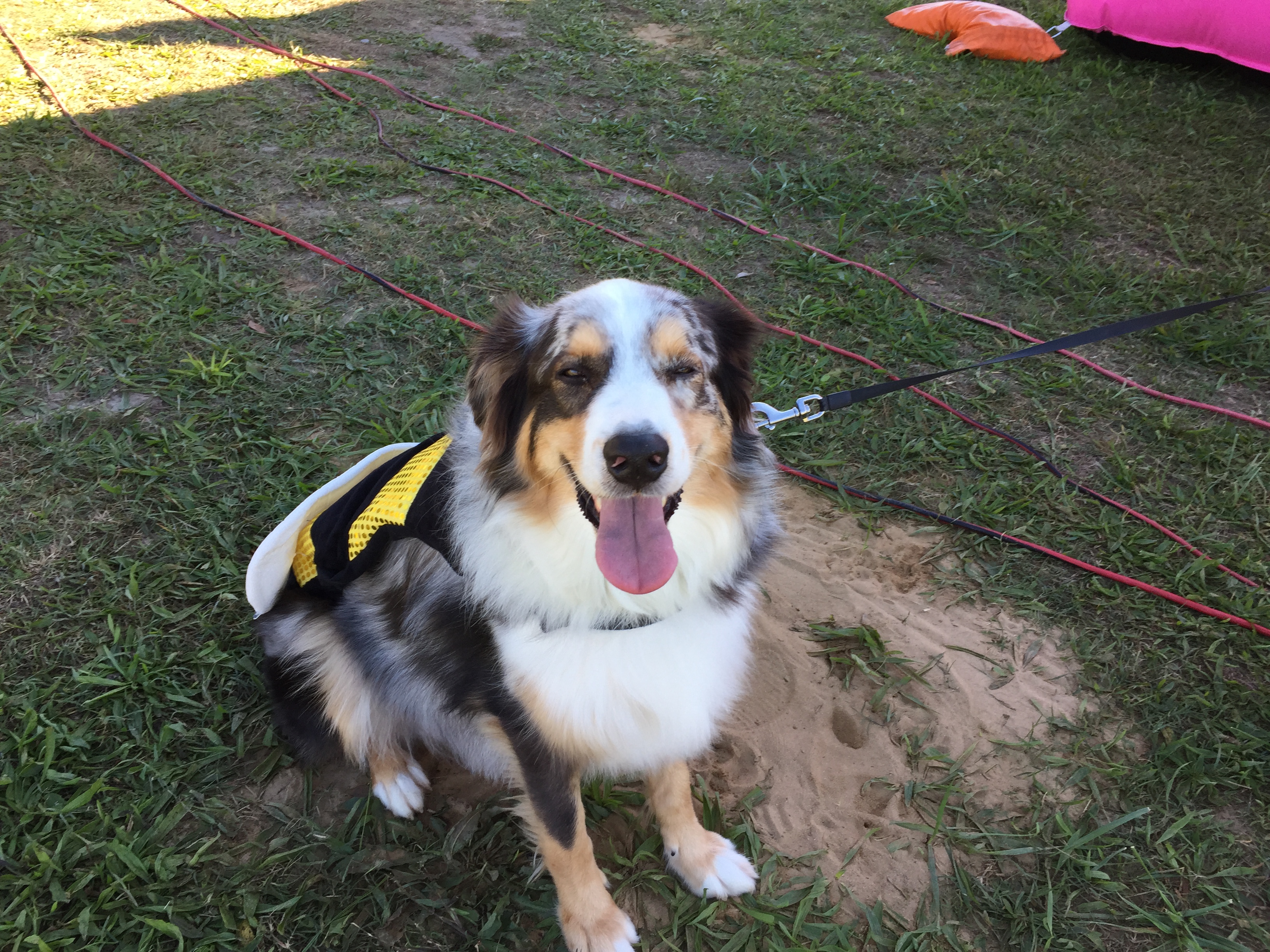 Bear used to rock this monkey outfit, but eventually outgrew it. 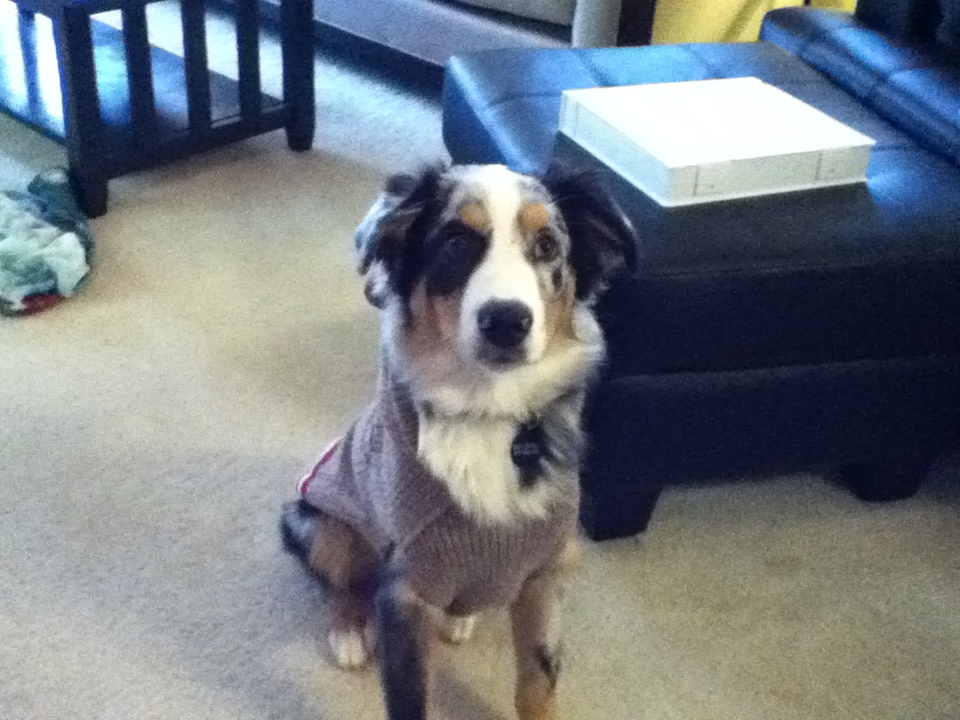 Bear was so gentle. He never complained if you turned him to batdog with your feet, and was very good with kids. 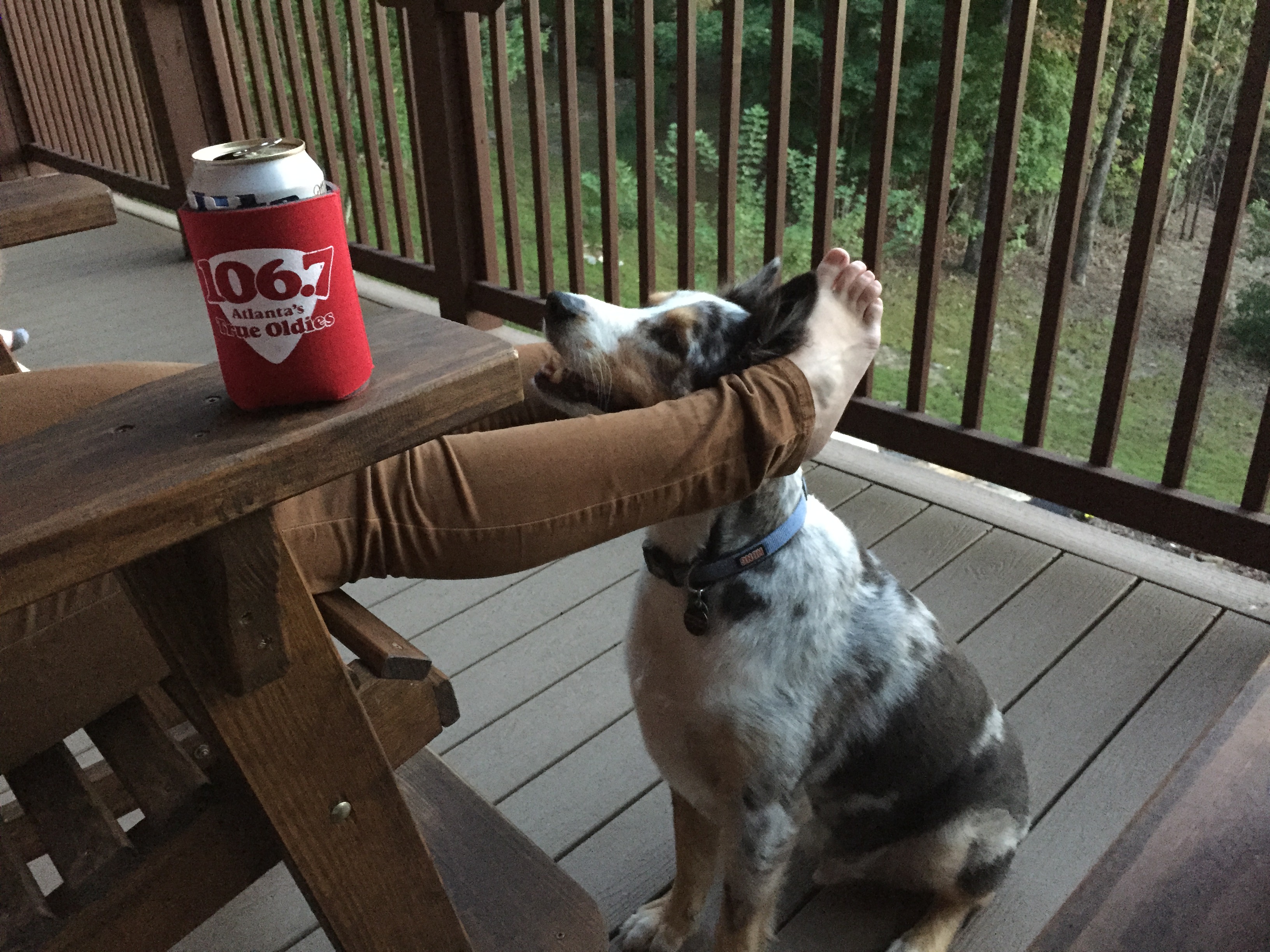 Bear falling asleep on the way back from Edisto beach. We plan to spread some of his ashes here.

Little Bear with his big sister and best friend, Sammy. 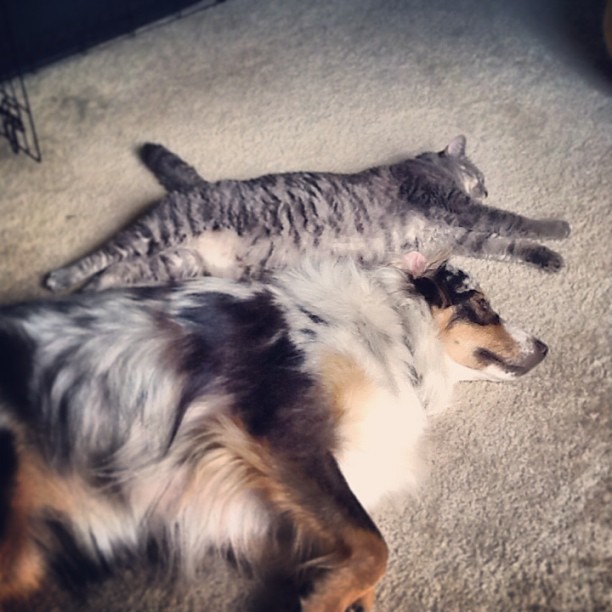 The sweet and playful greeting Elyse and I would recieve when we’d come home from work. 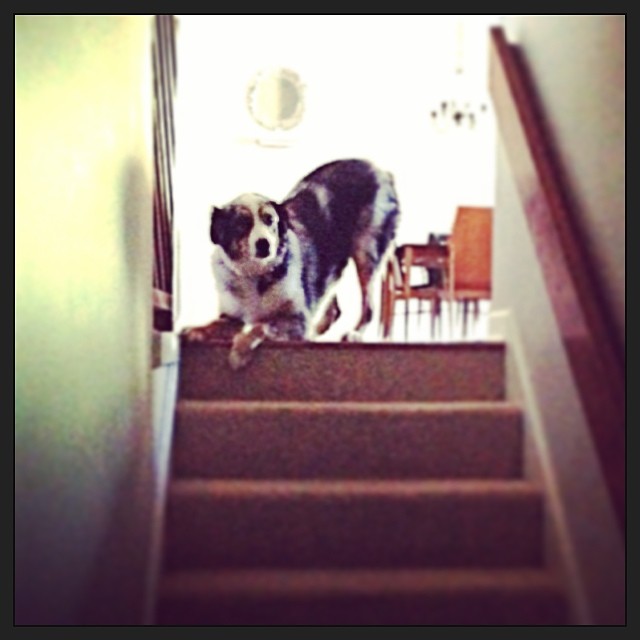 Bear with his favorite thing in the whole world.

Our puppy passing the intermediate training course with flying colors. 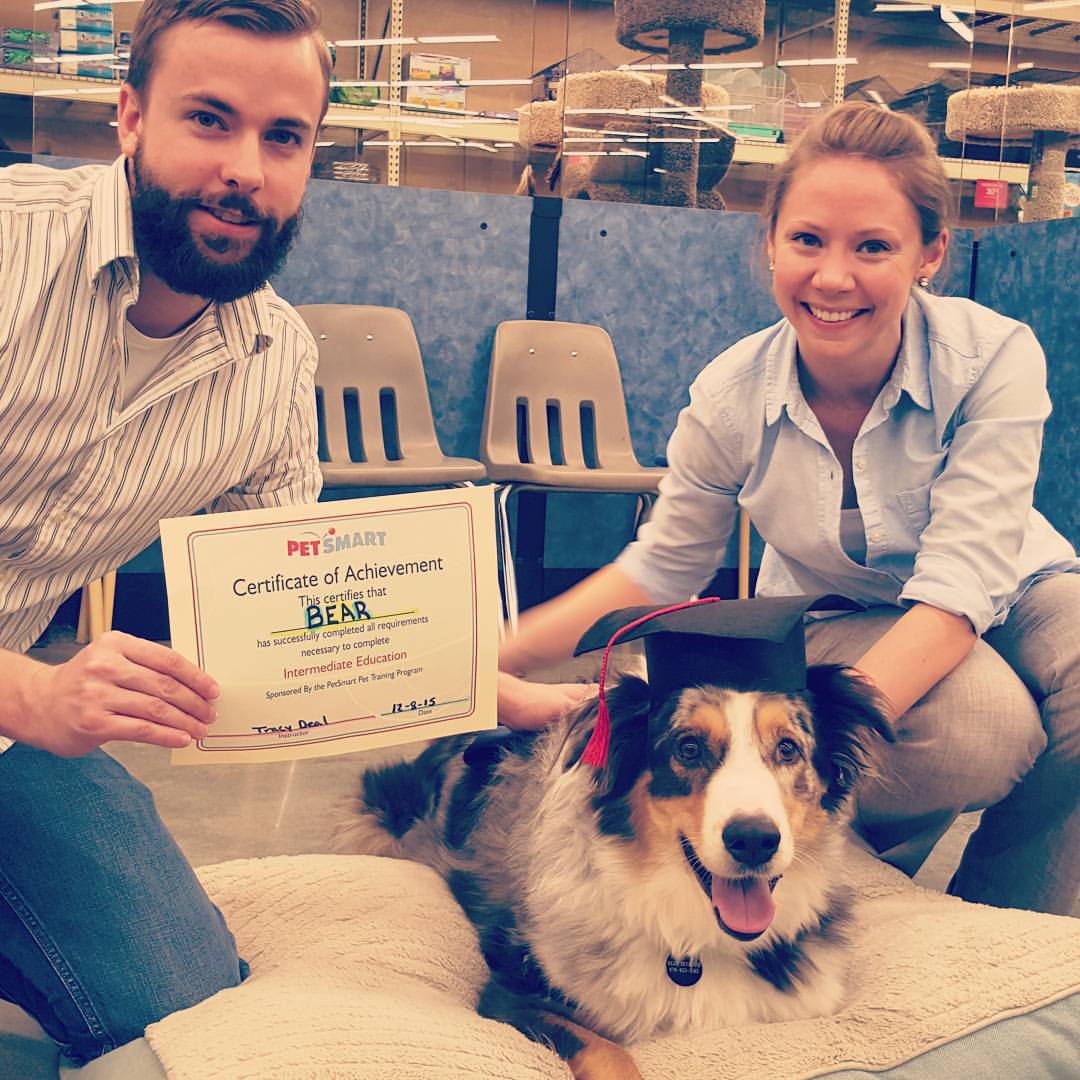 Bear being Elyse’s work-from-home buddy and also barking rude things at the squirrels. 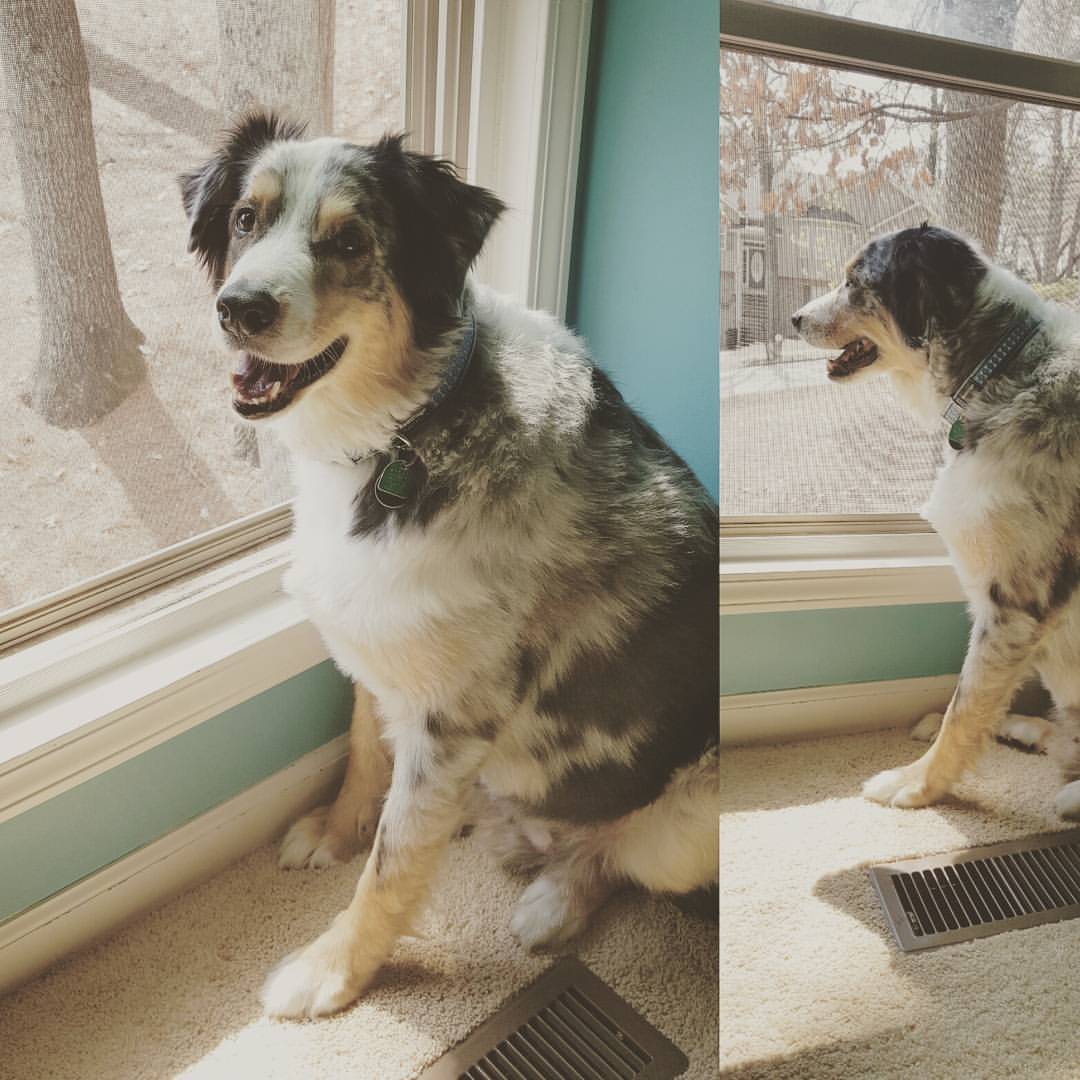 Bear enjoying his day at the beach. 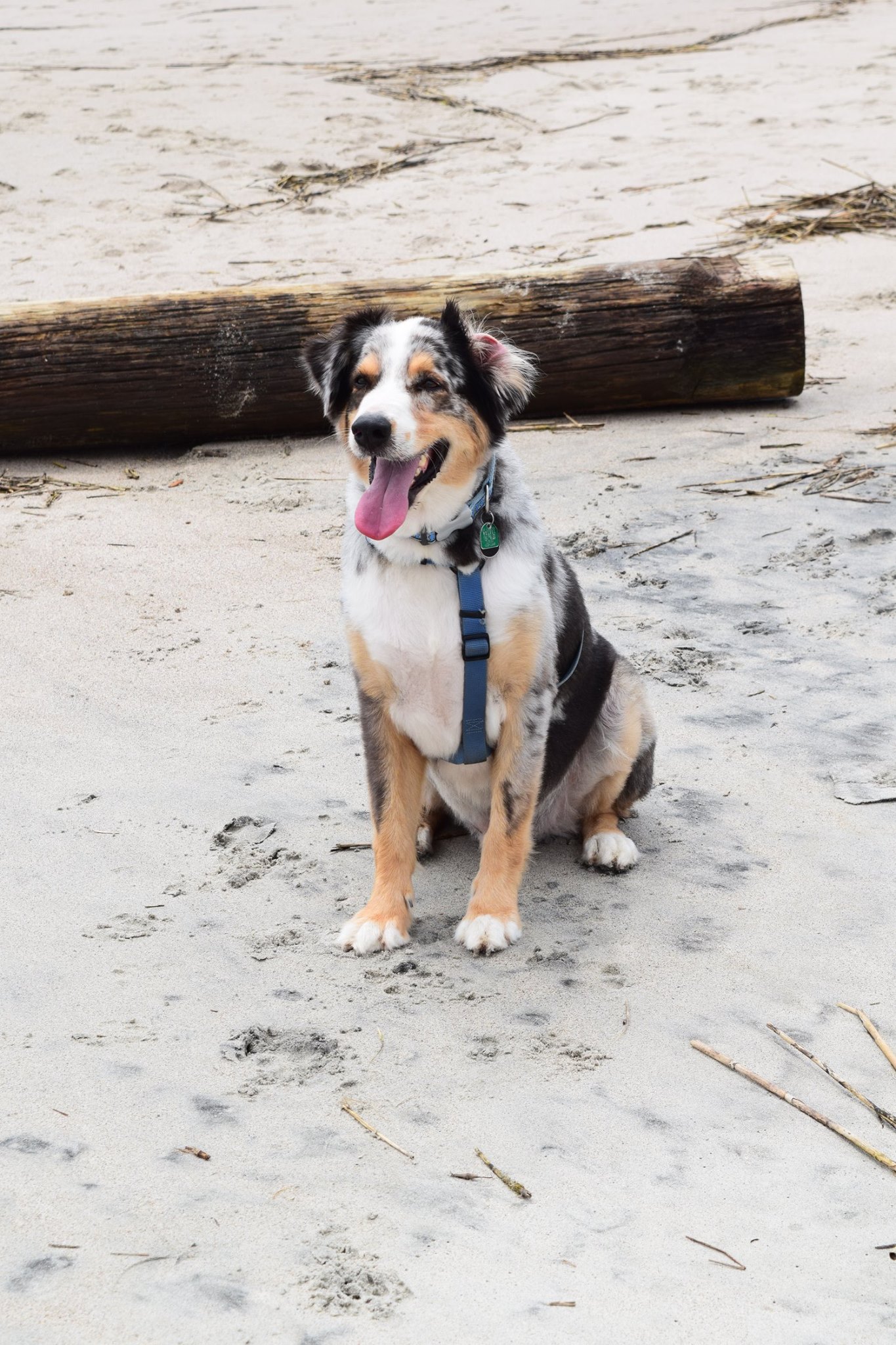 Bear going for a walk at one of his favorite places. 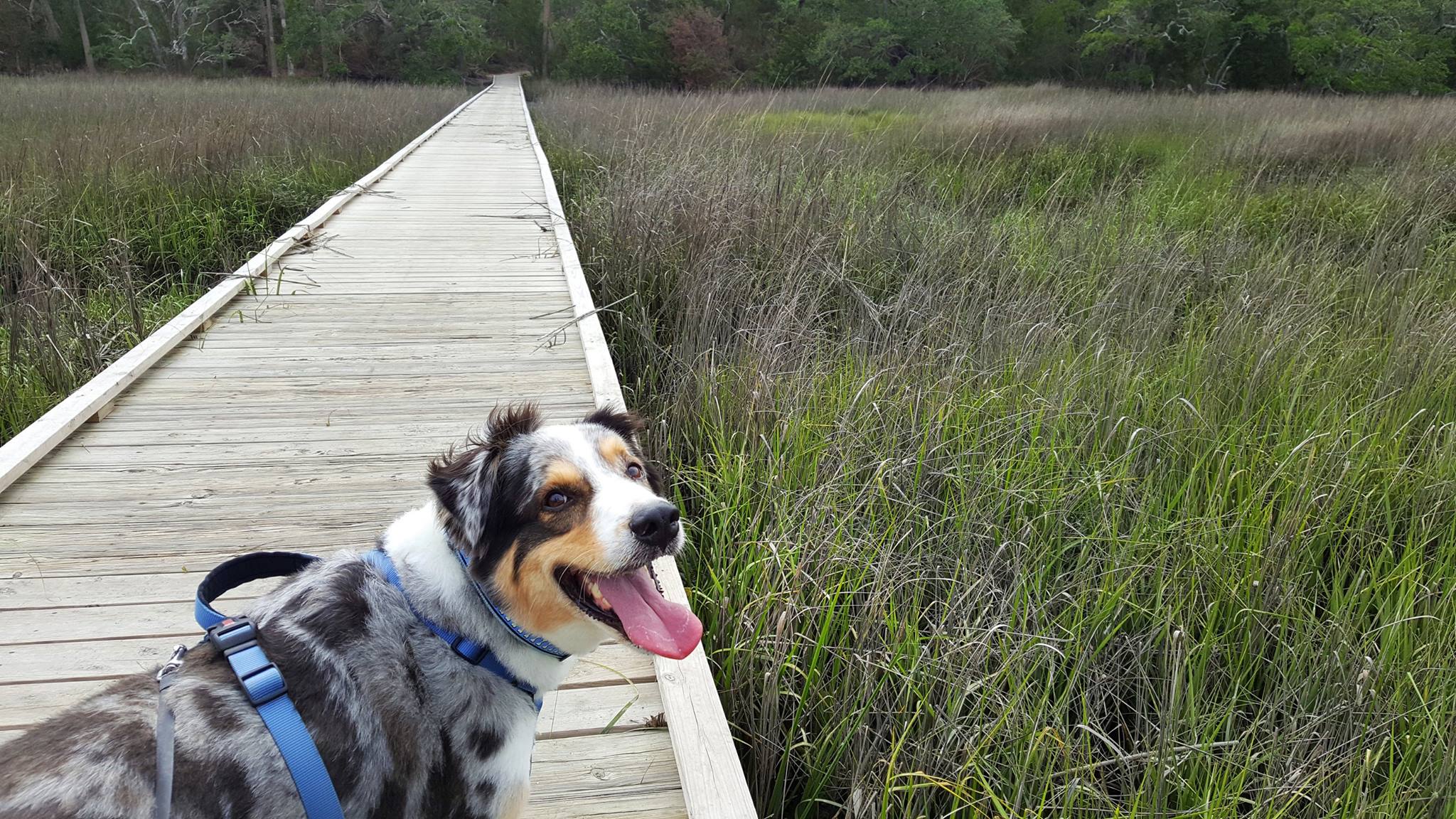